Serbian Orthodox Christians came to southwestern Pennsylvania and West Virginia in the early 1900’s. They attended other Orthodox Churches. In 1950 Father Sava Gnjatovich came to serve the Divine Liturgy in Carmichaels.

The parish was incorporated in 1951. The church’s completion was celebrated on October 31, 1954. The first Board consisted of George Zivkovich, Nick Belch, George Wonkovich, Mike Rogish and Joseph Maraney.

The Kolo was organized in 1950. Ann Krewasky was the first President.

The Choir formed in 1950. Martha Sweda was the first Choir President.  Mildred Mickey and Rose Brockovich were teachers in education classes begun in 1955.

Mark Zivkovich and George Yatsko were parishioners that went to seminary. Teodore Sokolovic was a youth at St. George Church and now is a Deacon.

Stan Brozik has served on the Central Church Council. Stan Brozik and Sonia Janson have served on Diocesan Council.

Millicent Hunchuck was the first Parish Nurse Practitioner. Linda Chambers is the parish attorney and a featured speaker at seminars and parish dinners.

Rev. Presbyter Milan Sturgis had a distinguished career in the United States Navy.  Lt. Colonel Willie Spens is among the many St. George parishioners having served in the military.

Pete Smargie and Milosh Serb Krewasky were attentive to veterans’ graves. Stan Brozik is responsible for St. George Cemetery. Stan Brozik and Grulja Milosevich were long serving Board Presidents that were Marines.

Pete Zivkovich was an early leader and choir member at St. George active in the Serbian community at large. Pennsylvania labor leader Frank Snyder has a strong interest in the parish.  Coal mines attracted Serbs to the area.

Parish families commonly had members suffering injuries or death in the mines. Prayers for miners were offered regularly in the church. Father Torbic regularly participated in the Robena Mine Memorial and miners’ rallies

The Parish Anniversary and Choir Slava-Dedication of the Church of  St. George in Lydda are celebrated. The Holy Scriptures and St. Nikolai of Zhicha ‘s writings have been integral to parish programs.

Daily Vespers, Matins and Akathists strengthened the parish’s liturgical life during most of the past two decades. Daily services nourished and supported the faithful as additions to Sunday and festal Divine Liturgies.

The parish has had an active outreach ministry. A weekly local radio program was also available on the parish website through the efforts of Tom Hunter. The radio program began in 2004 and continued until December 31, 2017.

Weekly adult educations classes began in 1999 and continue to the present.  Adult education materials and sermons have been widely distributed in the parish, by first class mail and the internet Arthur John Chambers facilitated distribution.

The priest is Spiritual Advisor to the Orthodox Christian Fellowship at Waynesburg University. The parish has reached out to prisoners in mailings and in visits.  Prisoners have performed community service at the church.

St. George Church attracts many parishioners and friends of the parish on Christmas Eve for the Badnjak Blessing. The annual Monongahela River blessing at Theophany is a time of great anticipation and joy.

Deanery Vespers on the Fifth Sunday of Great Lent normally are well attended. Vidovdan program readings have been deeply emotional. Professional Healthcare seminars on St. Panteleimon have been very educational.

Each Holy Saturday Liturgy offers a foretaste of joy experienced on Pascha.  St. George Church is best known for the Gospel proclaimed, lived and learned from throughout the year.

The parish has grown under Hierarchs DIONISIJE, STEFAN, Dr. SAVA, CHRISTOPHER, Dr. MITROPHAN and IRINEJ. The parish has attracted new members interested in the Orthodox life in Christ. 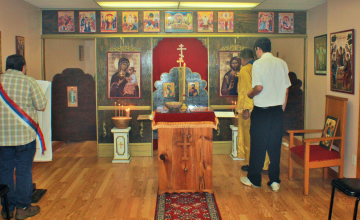 The Holy Trinity Serbian Orthodox Mission was officially established by His Grace Bishop Dr. MITROPHAN in 2000 as part of the Eastern American Diocese of the Serbian Orthodox Church. His Grace blessed the chapel and served the first Hierarchical Divine Liturgy on April 15, 2000. Since then services have been held normally twice per month.

The mission is especially sensitive to the number of people who have worked in the mines in West Virginia through the years and the men, women, and children who have suffered due to mining accidents. Prayers were offered at the memorial in Mononagah on December 6, 2001, for those who lost their lives in the mining catastrophe in Monongah early last century.